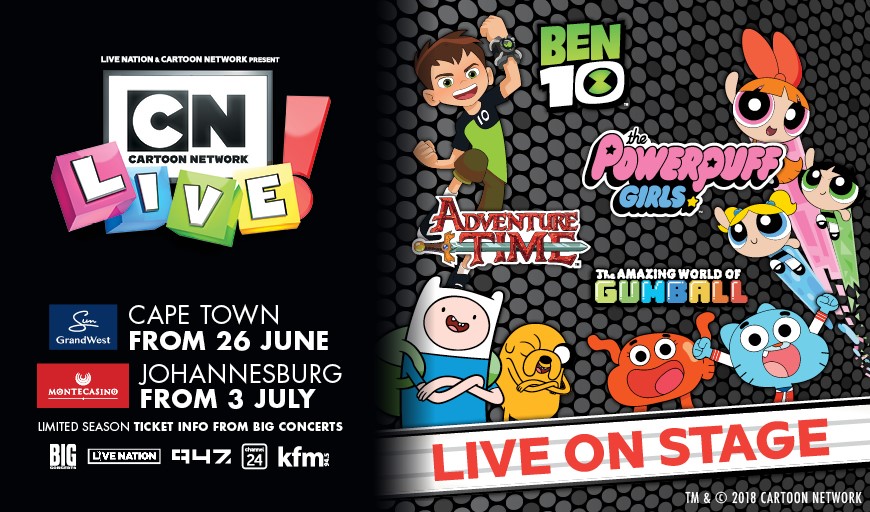 Does that not sound impressive? Yes, you read it, South Africa is hosting the World Premiere of Cartoon Network Live! For the first time ever, and on South African soil. Bonus, its perfect timing for the June and July school holidays.

The stars of Cartoon Network are to appear together in a spectacular and unforgettable live show. Cartoon Network Live is brought and presented to you by Cartoon Network and Big Concerts.  Expect to be amazed by the following characters on these Cartoon Network’s smash hit series Ben 10, The Amazing world of Gumball, Adventure Time and The Powerpuff Girls. The show will be an interactive, entertaining and exciting stage production for ages of 5 and up.

What is it all about?

In Cartoon Network Live! Kelvin Gizmo, scientist extraordinaire, takes us into the world of Cartoon Network which is under threat of Zarr, the evil robot. We travel through the Land of Ooo, the city of Townsville and Elmore and meet their famous inhabitants. With them, and the help of the audience, Kevin Gizmo will hopefully be able to stop Zarr and his evil plans.

Johannesburg from 3rd July 2018 at Montecasino

Tickets are now on sale through www.bigconcerts.co.za and Computicket

On Monday 11 June, together with Fria’s Superfood and a few other amazing brands we will be launching an awesome Giveaway for Cape Town. Cape Town residence please make sure that you follow all the steps, first step being, commenting on this blog post by telling me you live in CPT as well as which characters will be at this event and sharing the post. The second step will be to enter on Instagram or to enter on Facebook next week.

Everyone in Johannesburg, you may enter on the blog, by telling me that you are from Jhb and also telling me which characters will be at the show.