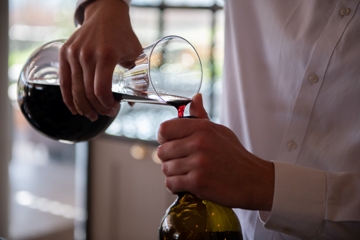 Who will be the Stellenbosch Wine Routes Ubuntu Trophy champs?

Some of South Africa’s best sommeliers will attempt to prize the title of supreme champion from rival Zimbabwe in a live, online broadcast of the Stellenbosch Wine Routes Ubuntu Sommelier Trophy on 13 December from 2pm.

The derby created by Jean-Vincent Ridon was inaugurated last year and was the first time in Africa that sommeliers from different countries faced each other in a tournament even when travels are made challenging.

Now, once again, the participants represent a formidable force with many having represented their countries in world championships too. The panel of judges comprises an international panel of respected sommeliers who will tune in digitally to regulate the event and decide the winner.

During the semi-final to be held in the morning, all participants will perform a number of tasks after which the top three South African candidates will take on the three SAZ finalists.

“Stellenbosch is South Africa’s premier wine destination, and by animating the story of our wines, the sommelier has become a cornerstone of this experience,” says Stellenbosch Wine Routes manager, Elmarie Rabe. “These wine ambassadors fulfil a crucial role that we eagerly acknowledge, especially in this milestone year for the region.”

This year marked the 50th anniversary of the Stellenbosch Wine Routes. With its establishment in 1971, Stellenbosch became the first region in South Africa to create an organised, visitor-friendly network of wineries.

Sharing this legacy, Lanzerac has itself become an icon of the region with its history dating to 1692. Its reputation for hospitality excellence made it the first choice for the Stellenbosch Wine Routes Ubuntu Sommelier Trophy in 2020 and it returns as a much-valued sponsor.

“Lanzerac is proud to be involved with the Ubuntu Sommelier Trophy for a second year in a row,” says hotel general manager Emile Langenhoven. “We believe in the development from within and creating these opportunities in partnership with other role players, just makes the industry as a whole, stronger. I believe this is also reflected in the name of this competition – Ubuntu: ‘I am because we are’.”

In November, Lanzerac Hotel & Spa was awarded 5-star Premium Status by the Tourism Grading Council of South Africa (TGCSA) – one of only seven properties in the Western Cape, and the only property in Stellenbosch, to have been given this status this year.