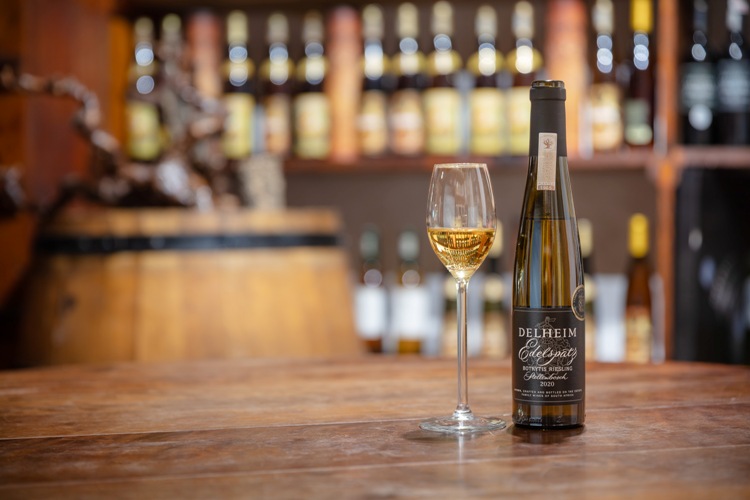 Renowned Stellenbosch estate Delheim has just unveiled the highly anticipated new vintage of Edelspatz Riesling – one of the wine world’s iconic Noble Late Harvests (NLH) and most consistently awarded wines since its inception in 1979.With this release, the 2020 Edelspatz Riesling undoubtedly takes its place in the pantheon of great wines having emerged from a season regarded as among the decade’s finest for noble rot expressions. Furthermore, it is the latest proud addition to a long line that may never have begun were it not for a chance meeting of two legendary winemakers.

“It is time to give Edelspatz the praise it deserves,” declares Delheim Estate winemaker Roelof Lotriet, referring to a new look also launched with the release of the 2020 wine. “For so many years, we have produced world-class noble late harvest from this block of Riesling. To elevate it with an appropriate bottle, into the same range as our flagship Grand Reserve Bordeaux blend was an easy step.”

Renowned the world over, Delheim Edelspatz has risen to status as a true folk icon. The wine was, for one, a regular delivery to De Tuynhuys, when Nelson Mandela held office as president. Celebrated British wine authority Oz Clarke rated Delheim one of the best producers of dessert wine in the world. Remarkably, it is made from a single 35 year old Riesling vineyard. This fact saw the wine’s 2019 vintage become the first of its kind certified as a member of South Africa’s select Old Vine wines, hailing from an accredited heritage vineyard.

The endorsement is provided under an official programme run by the Old Vine Project (OVP), which recognises that older vines make wines with unique character. Members of the Old Vine Project (OVP) are entitled to put a Certified Heritage Vineyards seal on bottles of wine made from vineyards of 35 years or older, together with the planting date. This is a guarantee to consumers of authentic wines grown according to the OVP viticultural and winemaking guidelines.  With Delheim Edelspatz having paved the way, just three NLH wines now enjoy this status today. The rarity of this wine cannot be stressed enough, especially considering the decline in Riesling vineyards due to the difficulty in producing high-quality wine from them.

“The variety needs cooler climatic conditions to be its best, and it is not the highest yielding cultivar. It is very, very susceptible to botrytis infection too,” says Roelof. “That’s why we take full advantage having found a much cooler site to promote botrytis infection even further.

“In the past 20-odd years there has been a huge decline in the amount of Riesling vineyards in South Africa in favour of more favourable cultivars, but when you have such a unique site in the heart of Stellenbosch that produces quality vintage after vintage, it becomes very difficult to even think about pulling out the vines.”

In fact, Roelof describes the Riesling as having become his “favourite child” among varieties, though scarcity of South African fruit meant his experience early on was shaped by exposure to French and German Riesling. “I spent time in Bordeaux where Noble Late Harvest is their game. Working with botrytis-infected grapes is nothing new to me. Adapting techniques and style to our Riesling vineyard block was easy and I think the quality shows,” he says.

The original Riesling vines at Delheim Estate were planted by the farm’s famous patriarch, the late Spatz Sperling – from whom Edelspatz (Edel meaning Noble) gets its name. Especially during his first years on the farm, Spatz often experimented in the pursuit of matching varieties to their best location. Fortunately, Delheim had one of Stellenbosch’s highest (and coolest) areas for planting vineyards at the time and this is where he situated the Riesling. The realisation of Edelspatz however initially seemed like failure. Spatz recounts in his diary that the season leading up to harvest in 1979 had been rainy and cool. “Checking on my vineyards, I found excessive rot and wrote-off the grapes as basically useless material…Having nothing better to do than wallow in my sorrow, I went to collect the mail…”

On the way, he bumped into a fellow winemaker and shared his mood. The response he received was unexpected: “No man, Spatz!” declared the friend. “Those are the best grapes for a noble late harvest.” The advice came from none other than Frans Malan at Simonsig. What had seemed to be a flop, turned out to be one of Delheim’s greatest treasures. The wine subsequently went on to build a proud legacy towards its recognition as arguably all-time NLH champion across authoritative wine competitions. Most recently, the 2019 vintage received five stars from Platter’s South African wine guide; the title of Best Noble Late Harvest at Winemag; and, 95/100 points from Tim Atkin MW.

In his tasting notes, Roelof says the 2020 vintage Edelspatz shows classic botrytis characteristics with elements of honey suckle, dried peaches and marmalade. Finely balanced, the palate offers layers of bright fruit and orange blossom. It may be enjoyed now or cellared for up to 30 years, he advises. The wine sells for R330 and may be ordered directly from Delheim’s online store at www.delheim.com.